The inventor of Paddock Paradise: well known equine barefoot trimmer Jaime Jackson, looked at the typical behaviour of horses in wild herds, and worked out a system which could be employed in any domestic horse terrain which would allow domestic horses the freedom to follow their instincts. This is our experience of putting Paddock Paradise into practice.

We have always kept our horses together, in larger or smaller groups depending on the circumstances. Sometimes we would keep youngsters and horses which were resting together, and have those which were working in a different band. It depended sometimes on the grazing land available, or the proximity of the stables. Sometimes how we arranged them depended on the number we were able to feed together outside.

There are always reasons for the way we do things at any one time, but over time we did learn certain interesting truths about managing horses together. These truths underpin the phenomenal success of our Paddock Paradise system today. They are not only the reason it works so well, but the Paddock Paradise system itself brings out the maximum benefit of these characteristics of horse behavior.


The social dynamics of the herd

Horse communities work in hierarchies. The most dominant horses take the lead in terms of deciding where the group goes, and they will have the first opportunity of any food which is available, and the first opportunity to drink at the water supply. The relationships in a domestic group of horses are not always simple, for example a horse may be bossy because he or she is insecure and more motivated to eat, and by the same token the horses which take responsibility for affronting dangers are not always the highest positioned in terms of getting to the food. This may be because in a group of geldings and mares the roles are less defined than they are in a wild herd situation.

What matters though, is that there is always a place for any horse. There may be exceptions if a particular horse has developed serious asocial behaviours, as a result of unnatural segregation, but the only insurmountable complications we have encountered involve stallions and rigs.

The role of a stallion in a wild herd is fundamental, and we can't expect them to fit into domestic scenarios without respecting their powerful instincts. There are always solutions if you put your values first however. Our values are that we are happy when our horses are happy, and no horse is happy on his own. For an example of integrating a rig into a herd look at Our Herds on the Importance of the Horse Herd page.

It is also possible to keep domestic stallions in a fulfilling environment, look at this article: The "natural" life of a champion dressage stallion and his mares at Dogwood Sport Horses .


Using the Herd Hierarchy To Your Advantage With Paddock Paradise

We have found that the hierarchy of a herd can solve many of your practical problems if you follow its rules. The main reason we used to keep our horses in separate groups was because when we fed them outside we didn't think that we could manage to hand them out their individual feeds in a group of more than four or five without a struggle!

We now have a herd of eleven horses, and we can feed them all individual feeds at once, with a minimum of supervision, because we use the hierarchy. Handing out the feeds in order of the hierarchy is essential, and the horses must also accept people as being higher up the hierarchy than them, otherwise they will not allow you to organize them. For example if there is a horse who has a smaller feed who finishes before a lower-down herd member, it is only possible to prevent stealing easily if that horse respects us as the one who decides! Being fed in this way is an excellent opportunity for horses to improve their manners, and to improve the trust and intimacy within the herd.

In fact it is not only working with the hierarchy which allows us to feed so many horses together, the particular configuration of Paddock Paradise is also essential. This is described in the section below: Paddock Paradise Pro's.

Go to Understanding Horse Herd Dynamics for an account written by Naomi Sharpe, one of our previous working pupils, based on her observations of a horse herd in the US. 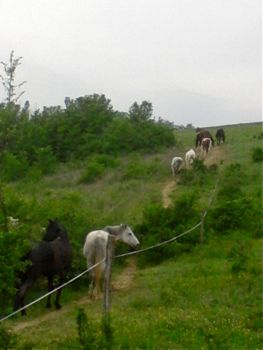 Horses are curious and they enjoy discovering new places and new things to do, as long as they feel secure. Paddock Paradise is the perfect way to bring out your horse's sense of fun and adventure while teasing him out of habits of timidity and institutionalization. Horses will easily slip into this mindset when they only ever go out in a field. We couldn't believe at first when we opened up the lane system to our horses, quite how conventional and unimaginative they had become, considering that they had already had much experience of large and interesting fields. It took them several months to start using the lanes properly. They have never looked back though and now they have a boldness and an assurance which brings out the best in their characters.

A paddock paradise system has the following features: 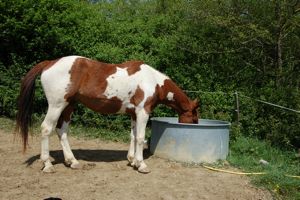 This is a map of our own lane system, we have about 33 acres in total, but the concept works for any size of terrain which is big enough for horses. 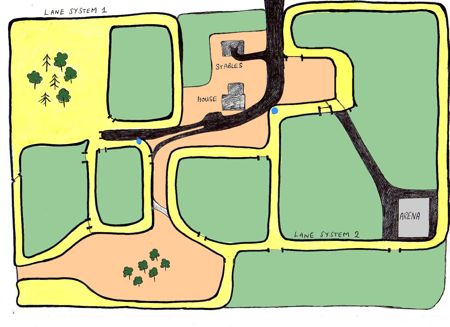 When horses are accustomed to the lane arrangement, they will learn how to line themselves up according to the hierarchy. This is critical for the smooth operation of feeding time because:

Making the most out of your land. A lane system encourages your horse to use the land you have better while allowing you to rest your fields when it suits you, such as:


It also gives you much greater flexibility as to where you can access your horses to feed them and give them hay. Basically you can do this wherever you have a perimeter that you can access, because the lane allows you to feed horses along any fence-line, either from the outside, or from the interior field or area. This means that whenever mud is a problem, you can change where you feed and distribute hay to somewhere that is cleaner.

The photo below shows how we are able to feed and hay eleven horses outside in the winter, even when our clay-soil normally makes mud a big problem, because we can access them from a gravel area alongside the lane where we can easily distribute hay and feeds from a trailer/quad.

Some have already been mentioned but the benefits for you horse are numerous:

Like all programs of rehabilitation (which is essentially what installing Paddock Paradise for you horse will be) it won't always be plain sailing. You will have to find solutions to your particular circumstances. Some of the teething problems we had to resolve were:


It really does pay off to be patient though, as these issues not only ironed themselves out, they did so because the horses became more socialized. They were becoming normal again, as horses should be. 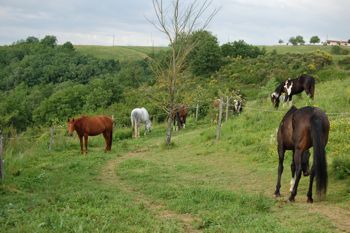 Below is an aerial view of our farm. If you look closely, or zoom in, you can see the lighter tracks indicating the network of lanes around the Paddock Paradise system, with the fields in between, and the dressage arena in the bottom left corner.


return from Our Paddock Paradise to Happy Horse Training home

Learn How To Trim
Your Own Horse's Feet 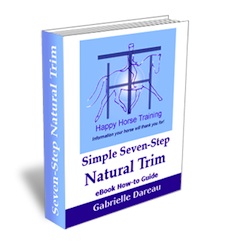 
Do You Have
A Horse Story
To Share On HHT? 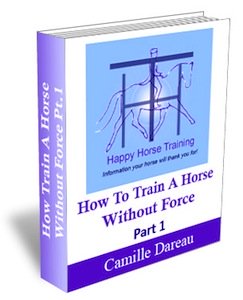